This Is Why I Do Genealogy Research

In my 50 plus years of doing genealogy research a few moments stand out as completely unanticipated.  Such was the case when I was asked to research the ancestry of my son-in-law’s grandmother, Jacqueline.  It was to be presented to her as a gift on her 80th birthday.

Some years previously, personal papers and items had been stolen from the family and never recovered.  Thus Jacqueline knew very little about her relatives, beyond those members she had known personally during her life.

Loving a challenge and facing a deadline, I took up the task.  What we had for starters were the names of grandparents, places of residences, and a mix of dates.  I checked the usual sources online (Google, Ancestry.com, GenWeb, FamilySearch, Findagrave, etc.)  and also sent for death and marriage records.  Amazingly, most of the members of this family had been in the United States since the 1600s and 1700s, so the records were fairly easy to find.

One incredible result was learning a branch of the family had lived in Iowa prior to the Civil War.  John J. Vest actually platted the town of New Philadelphia (later, Ontario) in 1855, now part of the city of Ames, Iowa.   And some of the land he platted included the area where our first house was located!  What are the chances of a man (Ryan) growing up in Tuscon, Arizona, meeting a woman (Naomi) from Ames, Iowa, in Denver, Colorado– only to learn his fourth great-grandfather laid out the area where her parents were living when she was born!

In addition, John J. Vest was also a veteran of the Civil War.  He eventually applied for, and received, a pension of six dollars a month.  Later, he would request an increase to eight dollars a month.

I obtained a copy of his Civil War pension file from the National Archives of the United States.  While reviewing the papers,  Ryan discovered his ancestor had consulted with an attorney for the pension increase … and the address of the attorney was at the very corner where Ryan’s current work address is in Denver.  Again, what are the chances of this happening?

The compiled research has been presented to Ryan’s grandmother Jacqueline. She was amazed to learn she had so many ancestors, having thought for many years her family was actually quite small. She later told me, “This information just makes me feel complete.” [And this is the main reason genealogy research is so rewarding for me.]

Ryan’s fifth great-grandfather, Thomas G. Vest, 1802-1865 (father of John J. Vest) is buried in the Ontario section of the Ames Municipal Cemetery. These photos, taken courtesy of my husband Jim, show Ryan and Naomi visiting the grave of his recently discovered ancestor: 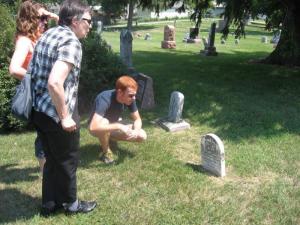 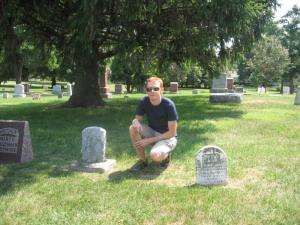 5 Responses to This Is Why I Do Genealogy Research

This site uses Akismet to reduce spam. Learn how your comment data is processed.